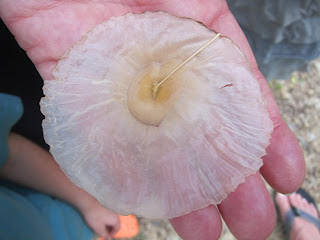 So as a phytochemist, what I tend to do is make an extract (usually solvent-based) of a plant, and then follow some sort of bioactivity-guided fractionation to get to pure bioactive compounds. Then I figure out chemical identity (dereplication) or the chemical structure (elucidation) using PDA, MS, NMR, etc...

The first question when doing this sort of work is: where to start? What plant to pick? There's lots of ways to go about that, and I won't get into it here... (traditional medicine, ethnobotany, chemotaxonomy, pharmacology, biochemistry, a hunch, etc.) Basically, I've done all that and now I'm going to try attacking it from a slightly different angle. Or maybe I'm going to use those same approaches, but try and automate it a little by farming some of the work out to my computer rather than rely solely on my own brain.

So I'm trying to teach myself new computer programs, and digging into the Web to find new resources. Virtual screening, protein modeling, docking, databases of virtual compounds... sounds so futuristic. But the term was coined in the early 1990s. Hmm...

We'll see where this goes. At some point, maybe I'll talk about the programs I've started using. Right now I'm not at a place to pass judgement. Feel free to leave any comments on tutorials, programs, etc.
Posted by Phytoalchemist at 11:04 PM 1 comment:

You knew that when you contacted me

I get a lot of invitations to connect via LinkedIn from people I don't know. <Delete> But sometimes there's a personal message that encourages me to take a closer look. So a couple weeks ago, I got one that included some remarks about my impressive research record on a particular plant and mention of "working with" someone I know and respect. Looking at his profile, I saw that he has some business exporting medicinal plants from Brazil. This seemed remarkable to me, since it is notoriously difficult to take genetic resources of any kind out of Brazil, except perhaps for general commodities. I was intrigued to hear a little bit more about how he's managed to negotiate CBD international treaties and work in Brazil...

So I accepted his invitation, and he sent me another email describing an interest in a fruit that I had studied. I had published a paper or tow on the phytochemistry of this fruit, and he wanted to talk to me about it. OK, why not..? The last time I followed up on a query like that, I'd gotten some delicious juice and jam made from the fruit in question from someone who was grateful for some information (he was starting a company marketing products from a related fruit.)

So I found a time when I was free and called him up to see what it was he wanted. I thought he had some questions about the beneficial phytochemistry. But it seemed more like he just wanted to talk about the fruit, and never really got around to asking any questions. Mostly, he told me about what he was working on, which was totally unrelated to my current research interests.When I tried to ask him about how he managed his agreements to collect and "sustainably harvest" material from Brazil, I got some vague answers about knowing everyone and having worked there for decades. It's not the sort of guarantee I would rely on if I was afraid of biopiracy claims.

It took a while, but I managed to eventually get off the phone. He wanted to send me some samples "to test," even though I know it wouldn't go anywhere in my current program, and I lately I've been a stickler for making sure any plant material that goes into my research needs to be verified as ethically sourced.

Anyway, I wasn't surprised when I never got a package, but I was a little surprised today when I got another email, and he makes it sound as if I'm some back-handed evil monster. I didn't even want his wingnut crap.

From his email:
I'm very concerned about dealing with 'Big Guy's" for fear of being scooped up and piled on the heap of entrepreneurial road kill once a large multi national get's their hands on people like me.  Nothing personal, but I have spent 20+ years doing what I do and about to launch a product in a week and clinical trials soon after.

Ouch, dude. It is sorta personal. You came to me, sought me out, and used one of my mentor's names to get me to respond. And then you make it seem like I'm trying to gobble up your precious invention. Um, OK. I guess we can all breath a sigh of relief now.

Posted by Phytoalchemist at 10:50 PM No comments:


Posted by Phytoalchemist at 11:37 AM No comments:

So if it's true that "Natural Products ... are big business," then why has Big Pharma canned all their natural products programs?


Posted by Phytoalchemist at 9:43 AM No comments: